My flight is at around 7am which means I arrive at Kaohsiung airport before 5. I usually go to sleep around 6am so failed to get any sleep beforehand. A few screaming babies on the plane prevent anyone from sleeping, and the worst airline food I have ever tasted is served up (thanks Vietnam Airlines!) – Things are looking bleak but its ok because I know that the weekend ahead promises to be insanely fun and worth the sleepless flying festival of baby tears I am currently trapped on.

I arrive in Vietnam, change my money over (and become an instant multi-millionaire – 1 million Vietnam Dollars is about $47 US) and make my way to the front of the airport. After about 30 minutes of taxi haggling (as instructed by the promoter, who did actually order a taxi for me which never showed up) and considering commandeering the taxi driver holding the sign that said ‘Pam Chambers’ and pretending I was her, I manage to get one driver down to an acceptable price. We walk to his car, and I realise its not even a taxi, this seems to just be a guy who happened to be at the airport and thought he’d give someone a lift and charge for it. This felt a bit dodgy but everything worked out in the end, except for the fact that the pretend taxi driver proceeded to play songs such as ‘Celine Dion – My Heart Will Go On’, ‘Lionel Richie – Hello’ and even sang along to ‘Mariah Carey – Without You’ (which sounded quite a lot like THIS), giving me a quick taste of what the older generation of Vietnamese are getting down to these days. On the highway, we passed a guy with a wire cage on the back of his motorbike, stuffed absolutely full of live chickens, with their heads and wings all squashed up and poking out the sides, looking pretty unhappy about the whole situation – grim. The taxi driver couldn’t find the promoters place and got a bit lost for another half an hour) but eventually we got there.

The view from Blip Blop’s apartment.

After a warm welcome from Luke aka DJ Blip Blop (the English promoter who had booked me for tonights party), we settle in his front room and watch some classic middle of the road UK television, including Come Dine With Me, Ramsay’s Kitchen Nightmares and (as Luke put it, “to remind us why we are better off not living in England”) Jeremy Kyle. After some excellent bad TV and Alan Partridge quoting, we head to the nearest bar for the ‘cheapest pint in the world’ – 8 pence/4nt/12 cents is pretty standard pricing for a pint in Vietnam – “Back of the net”!

The Bar & The Tiger

At the bar, we meet up with another DJ who would be playing at tonights party – DJ Vaughan. I hadn’t seen either Luke or Vaughan since my last time DJing in Hanoi in late 2012, it was great to see them both again and catch up. Conversation turned to the local DJ scene and I learnt of a few interestingly named local performers: DJ ‘Milk Danger’ and ‘MC Bob’ stick in my mind. Post pub, we witness something none of us ever would have imagined we would see. There is an aquarium on the side of the road with either a large striped cat or a baby tiger inside, tied to a massive rock and drowned. The aquarium is filled with rice wine – a local, very strong speciality. Inquisitive locals start to gather round. Someone opens the lid and the smell unleashed is intensely unpleasant. The locals all claim it is a tiger, but we are still unsure. It seems that someone has done this to sell the rice wine afterwards – supposedly the dead tiger increases the value significantly. So that was weird… 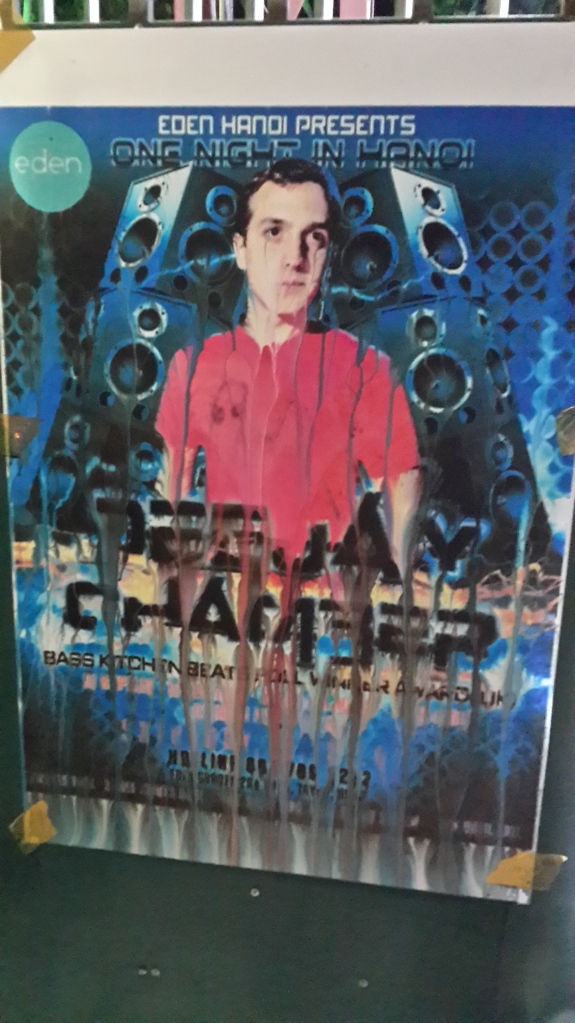 Leaving this poster in the rain made it very sad indeed.

We went back to Luke’s place where I took a quick powernap before setting off once again to go to the venue we would be playing at that night – Eden ‘The Party Garden’. It is a badass outdoor venue, with a stage area (complete with pole dancer poles) and dance floor surrounded on almost all sides by food vendors, bars, toilets and slightly randomly, a bunch of farmyard animals in a stable area – I guess these guys end up being served up by the food vendors. Luke gets on stage for a soundcheck/warm up set around 8pm – The crowd there at this time are almost exclusively families who are eating at the restaurant or barbecue. The dancefloor and stage area slowly fills with small Vietnamese kids and a few badly dancing dads which was pretty surreal and unexpected. Some of the smaller kids start pole dancing, before being pulled away from the poles by their parents. 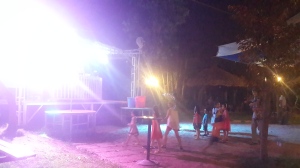 As it gets later, the kids and dancing dads start to clear out and a more appropriately aged crowd begin to trickle in. By the time I get on stage the numbers are good and people are dancing, but around 45 minutes in to my set, a guy comes up next to me and gestures for me to turn the music off before pointing at a police officer at the side of the stage. The mood drops and people start questioning whether the party is over already at a little after midnight. 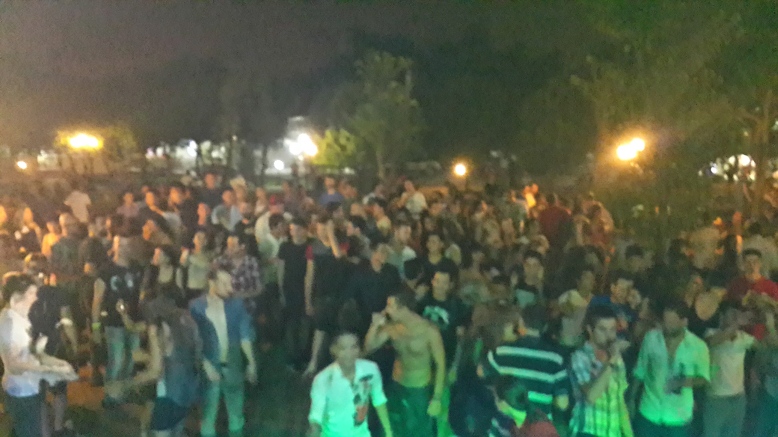 A very displeased crowd when the police came.

A fairly uncomfortable 20 minutes later, we are told we can start the music again (I can only guess what happened behind the scenes there) and I get back to the job at hand, playing a mashup set of dnb, dubstep, hip-hop, ghetto funk and glitch hop (here’s a clip with some proper rubbish camerawork from Vaughan). With the party in full swing, the foam machine comes on and the atmosphere goes up another notch. By the end of the night, I’d guess between 600-800 people are partying hard to some great sets from Blip Blop, Vaughan and Spectrum (another English DJ who played some of the nicest dnb I’ve heard in a long while, including THIS). 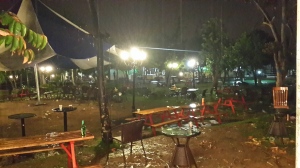 Make it NOT rain…

After the party, feeling extremely haggard and partied out, we got hit by a full on storm and trapped in a small tented bar area. Spirits were high after a banging party, but the rain continued to pour and it was maybe another hour or two before we could head back to Luke’s apartment where Luke kindly offered up his room (opting for the sofa himself) and I slept like a log.

The Morning After The Night Before

Goooooood morning Vietnam! I find myself waking up dazed and hung over. Luke puts on some entirely appropriate and amazing chillout music and the morning is spent listening to Air, Massive Attack and Phaeleh. We then order and proceed to devour a banging curry (something I had been looking forward to since my last time in Vietnam – Its pretty rare to find a decent Indian curry place in Taiwan) and head back to Eden, which is in a bit of a state after the previous nights antics. At Eden we meet up with the DJ who has arranged my show for tonight, French ex-pat and king of electro-swing, Gimix Nomad. Gimix takes me to my badass 5 star hotel for the night, which he tells me is one of the top 10 hotels in the world. I get settled in, take another nap and start to prepare for the show. 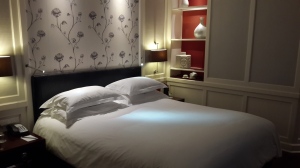 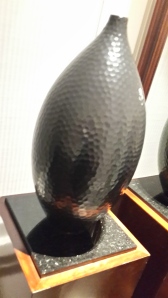 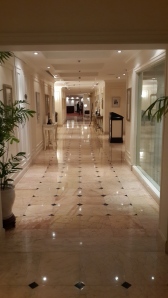 Heading downstairs from my room and getting pretty lost in the massive ‘Sofitel Metropole’ hotel with its endless ultra posh corridors, I eventually find the Angelina Bar, our venue for the night. I find Gimix already set up and raring to go. I proceed to set up my Maschine next to him for fingerdrumming accompaniment. The bar is extremely fancy and actually surprisingly chilled – the musical policy is totally open for Gimix to do what he wants with (which is a pretty rare and beautiful thing in Asia I’m finding). Gimix plays a sick set of nu-funk, electro-swing, chillout, funky breaks and hip-hoppy stuff with me accompanying on the fingerdrums and throwing in a few little b2b-ish bits. After the set, Gimix introduces me to his mates and girlfriend and we head to the launch of a new club, which I instantly forgot the name of.

The club opening is quiet, only a few tables have people at them and the dancefloor is empty, but we are happy to relax there (despite all the power naps throughout the weekend, I’m still knackered, so sitting down is pretty perfect). The local DJ is playing some very nice house music and looks to be enjoying himself, despite the lack of crowd. We are brought a bunch of beers and a big platter of fruit containing the biggest grapes I have ever witnessed.

Seriously, LOOK AT THE SIZE OF THESE GRAPES! 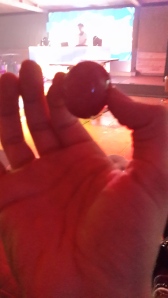 After an early finish at the club, and some gratitude for showing up from the very hospitable owner, we head back to Gimix’s girlfriends authentic Italian pizzeria, for genuinely some of the nicest pizza I’ve ever had – SIX cheese pizza is the bomb! If you are in Hanoi, be sure to check out Paolo & Chi’s! After this, Gimix, gives me a lift back to the hotel and I crash for the night. A curry, a pizza and a five star hotel in one day – most excellent!

The next day, I meet Vaughan and Gimix to eat one more curry (for the road) before heading to the airport to catch my flight back to Taiwan and realising I had failed to eat any Vietnamese food whatsoever on the entire trip. It was an excellent weekend, and I would recommend anyone thinking of visiting Hanoi to do so. Hopefully I’ll be back there for some more shows soon.