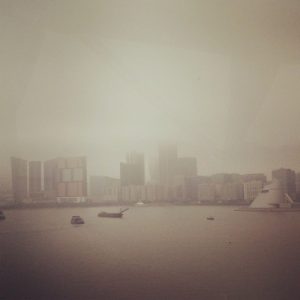 Following a show the night before which had me DJing til 1.30am at Brickyard in Kaohsiung (I’m very glad I requested an earlier set time than I usually get there), I had to wake a little before 6am to get to the airport – Annoyingly, DJ life often involves little sleep and lots of travel (but its still mostly awesome). I arrived in Macau at 10am, finding the Sideshow KUTS promoter, TJ, at the airport. The view was very cloudy but you could just about make out an amazing array of skyscrapers of varous weird shapes and sizes (including Grand Lisboa – the big golden alien pineapple looking one) as myself and TJ, took the free ‘casino bus’ into the city. We meandered to his apartment where I made myself at home.

On the way to TJ’s place, I came across the most fashionable lost cat poster image of all time…

After a quick chill at TJ’s, we walked into town to get a kebab (very nice, although I felt the kebab shop – ‘Arabian Kebab’ – could have had a better name – Abra Kebabra and Kebabylon instantly spring to mind). Delicious yet unoriginally named kebabs eaten, we checked out some very cool graffiti, followed by the ‘old town’ (the main sights to see including some overcrowded narrow alleys full of shops and the front wall of an old church – the rest of the church is nowhere to be seen) followed by the Grand Lisboa (the big golden alien pineapple looking) casino. Whilst enjoying an overpriced beer (courtesy of TJ) and some free mixed nuts, we were treated to an odd casino cabaret show featuring skimpily dressed Russian dancing girls miming along to obscure northern soul tunes whilst removing items of clothing. Sadly there were no photos allowed here, but I took a sneaky one from the next floor up showing one of the casinos many floors full of blackjack tables, slot machines and various ridiculous ways to lose money. Note, the casino floors are entirely windowless – I guess this is to make it easier for gambling addicts (‘gamblaholics’?) to lose track of time as they lose their cash, making it easier to keep them there longer. We popped back to TJ’s place (as I was in need of a quick nap).

The next stop was Macau ferry where we went to pick up Janette Slack (who was also DJing that night). The only time I had met Janette previously was for a few seconds on stage in the main room of Fabric in London when she awarded me and the Bass Kitchen team the ‘Best Small Club/Event’ award at Breakspoll 2010. After a quick stroll from the ferry, we headed to Sky 21 where we were treated to some of the best food I have ever eaten – As a 7-11 regular, I’m not really used to the gourmet shizz. The venue is glitzy and upmarket with views overlooking the entire city. Suddenly, as if from nowhere, my Taiwan based buddies Goober Gun appeared. It turns out they were in Macau for some meetings and to see The Rolling Stones play the next day and wanted to surprise me – which definitely worked. Much banging food was eaten, many drinks drunk and a lot of laughs were had. Also, a particularly alienating (for anyone that didn’t like fish puns) epic fish pun battle took place between me and Janette – just for the halibut).

The food to plate ratio of this particular dish was not great – however, the food to deliciousness ratio was through the roof!

Soon enough it was myself and Janette’s turn to DJ – we played a few hours of 3o minute short sets each (to allow for maximum toilet-breakage) followed by a little b2b stint at the end (which was my highlight of the gig). With the show finished, we headed downstairs to check out “Macau’s busiest club” – D2 – which was definitely not my style. Massively crowded (to the point where it was hard to move wherever you stood in the club), mediocre ‘safe’ music and filled with a nasty ‘I’m out to get laid and maybe have a fight’ vibe, we didn’t stay too long there.

Next up, myself and Janette headed back to TJ’s where we spent the next 6 or so hours becoming best friends, discovering we had matching beanies and making many very stupid, sleep deprived jokes. During this time, Janette also introduced me to my new favourite Louis CK clip, the Awesome Possum, which had us both crying with laughter. Around midday, we finally all got some much needed sleep.

Rested but still feeling a little haggered, we headed to an Indian curryhouse for a particularly banging curry (again, it was courtesy of TJ, who is definitely one of the more awesome promoters I have ever worked with, and also a pretty badass scratch DJ). Curry eaten, I bid farewell to my new pals and headed to Macau airport to catch the flight back to Kaohsiung and continue the adventure in Taiwan…

Big tunes which were played: